Hot news, including on Egremont and Lidl

It wasn’t an auspicious start to the year. First, the news that 2014 was the hottest on record, the 38th successive year with above-average temperatures, something which would happen by chance alone less than once in 27million times, so this is not natural climate variation. Global warming is undeniably going apace and a major driver is the temperature of the sea. No wonder we were able to have a picnic BBQ on the beach on Christmas Day and a number of people were bathing.

Second, there was the report that the major threat to the liveability of the world may not be global warming as much as pollution. It said that humans are “eating away at our own life support systems” at a rate unseen in the past 10,000 years by degrading land and freshwater systems, emitting greenhouse gases and releasing vast amounts of chemicals into the environment. A major threat is the amount of phosphates flowing into the oceans. As I have remarked before, it’s not the planet which needs saving. The planet is fine and will go on for a very long time. It’s human life which could be at risk within a couple of generations. 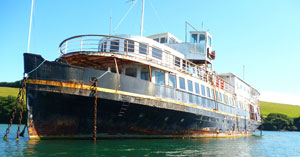 The third inauspicious event is even nearer home. Egremont never got to Penzance for her refit as she was again struck by a financial crisis. The sailing school has had to be sold off and the Egremont is back in the care of the charitable Trust which will endeavour to raise £1m to restore her to her former glory. This means that she will not be used as a sailing school this season and may leave for her refit in the summer – all in the hope that she will be back in commission for the 2016 season.

Our side of the Harbour may therefore begin to look rather different as the two remaining houseboats may leave shortly as well. Yachties hate these houseboats with a vengeance: but I take a more relaxed view. Unlike a swinging yacht, the houseboats do not take up half an acre of water; nor do they discharge into the Harbour. They are merely part of a high-tech time-share experiment which, with proper management and finance, could all have been very different.

Finally there is some good news for Lidl customers. Lidl’s dishwasher tablets work well, are inexpensive and are phosphate-free (the Germans are good at these things). So that is one New Year’s resolution sorted!