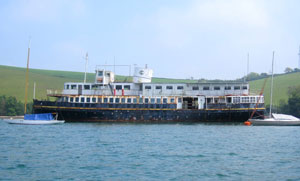 I recently had reason to scan back over some of the 75 pieces I have written and smiled at some of the recurring themes. One subject I always seem to get wrong is the Egremont. My piece about her in May looks like no exception. That may mean that we have a problem, possibly even a big problem.

Let me recap: Egremont was going for a refit last year and that was cancelled. Then she was going away this spring but that was also cancelled for the unusual reason that around £1m looked to be pouring in and an even bigger, better refit was now on the cards. The hopeful aspect of this was that no longer would the trustees attempt to keep Egremont afloat solely on the basis of a sailing school for children and some adults. She was to be not merely a fine restaurant, but a floating boutique hotel.

We were led to believe that this had all happened very quickly – but it seems to have evaporated equally quickly too. The plan to leave in May or June – the dates were agreed so that the Harbour could be cleared – was suddenly set aside. Instead of returning in September, that is when she will now be leaving: but we were told that the advantage of a summer refit is that the paint would stick better in the balmy sunshine of a Penzance August.

The small print said that Egremont had just received a certificate of seaworthiness to allow her to leave, which would be valid for six months: in other words, it would expire around 1 November. That gives a generous window; but if there is no possibility of her leaving before September, and there is some other hitch, the certificate will expire. If it expires, will she be able to get another, will she ever be able to leave, will the Harbour be stuck with a rusty, unusable hulk?

The Egremont is owned by a trust and the risks attached to her fall to the trust. But if she can’t leave, the risk falls on the public purse. At what point should the Harbour Board blink, say enough is enough and require her to leave, seek to enforce that requirement and, if not, tow her out while she still has a certificate to go to sea? As I have been so wrong on the Egremont in the past, I won’t attempt an answer.