A network of friendship and support 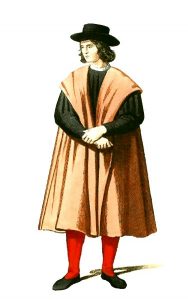 John Kempe was the husband of Margery Kempe (1373-1438), who wrote what is generally regarded as the first autobiography in the English language and which tells of Margery’s travels across Europe and Asia.

John and Margery had 14 children but, following a vision and “holy fits”, Margery set off on a series of devout and protracted pilgrimages, including to Rome, Jerusalem, Norway and Santiago de Compostela.

John was a successful businessman and public official. But, because he lived so much under Margery’s shadow, little is known of his life. It is his devotion to Margery, supporting her failed business ventures, repeatedly getting her out of trouble, bailing her out of prison, fighting her heresy cases in the Courts, supporting her foreign travel and repatriating Margery from Compostela, which is such a continuing inspiration to so many people today. This devotion must have been mutual for when, towards the end of his life, John was seriously ill, Margery even welcomed John into her own home.

The main work of the Society is, of course, in friendship and mutual support: but the Society also runs training/CPD courses on life-skills which are essential for its members, like maintaining mindfulness/wakefulness during sermons or poetry readings; the art of criticism; the best way to help when a password is forgotten; printing booklets; and how to find lost documents in an iPad. There is a specialist advanced module, often held in a suitably remote location, on any unresolved questions in the philosophy of dance.

Because John Kempe’s dates are not known, in recognition of Hugh Marriage, who is Life President, the Society has elected to commemorate John Kempe on St Hugh’s Day: 1 April.