I am delighted to be involved with a wonderful concert at Guildford Cathedral to celebrate International Women’s Day this year. It’s called ‘Inspiring Women’, and I’m privileged to be reading three of my poems. interspersed between the music items. You can see the programme on the second of these two links:
https://www.hennesseybrownmusic.com/concerts/international-womens-day-inspiring-women
https://www.hennesseybrownmusic.com/concertorder

My short story, ‘William Harvey’s visitor’, has been published as an e-book by CUT: <https://www.cutalongstory.com/genres/historical-fiction/23.html>  (11th October 2021)

My poem, ‘The philosopher’s iff’, was published on the Ink Sweat & Tears website of poems about Choice to celebrate National Poetry Day, 2021.< https://inksweatandtears.co.uk/poetry/>. It explains a term used in symbolic logic.  (11th October 2021)

I was so pleased to receive copies of ‘Pandora’s Pandemic’ in time for Ways with Words. A busy few days at the Ways with Words Festival in Dartington. I launched my collection of covid poems, ‘Pandora’s Pandemic’, at the Oversteps Day; I gave a presentation on my latest novel, ‘The Elder Race’ in the Great Hall; and I chaired various other events over the weekend. It was a much quieter festival than usual, because of ‘you know what’; but enjoyable none the less.

The two stories I ‘submitted to the Poetry on the Lake short story competition were both shortlisted. They are William Harvey’s visitor and Pillow talk.

The latest French Literary Review (issue 35) contains an extract from my latest novel, ‘The Elder Race’. The scene is set in Paris, where the main character of my story is introducing her lover to the joys of art and is surprised when he makes a startling discovery.

October 2020: I was pleased to perform at the Bristol Lyra Festival (joint with the Bristol Poetry Festival and the Bristol Festival of Ideas). Our show was compiled and performed by a group of Poets for the Planet and was called Interbeings.

May 2020: the Covid-19 project run by Carol Ann Duffy and the Manchester Writing School at Manchester Metropolitan University published my poem Roadway, written on 9 April 2020 (the poems are displayed in date order)

May 2020: Poetry Wivenhoe published a Covid-19 poem, Out of the Wind, and Audible, which is also on YouTube.

May 2020: The Poetry Kit published a sequence of my Covid-19 poems in its Poetry in the Plague Year series

February 2020: It was a huge privilege to preach at Corpus Christi College, Cambridge and a great delight to spend the whole weekend as a guest in college. The topic I was invited to preach on was Poetry and Theology.

In January 2020 I was elected to the Society of Authors Poetry and Spoken Word Group committee.

What happens when advances in medicine unleash uncontrolled population growth?
My latest novel, The Elder Race, was published on 3 April 2020

I read at the Aldeburgh Poetry Festival on 8 November 2019, at the launch of the new Coast to Coast publication.

On 13th November 2019 I was guest poet at Pembroke College Oxford, in the Poetry in the Pink event.

On 28 February 2019 I did a Wombwell Rainbow interview about writing.

My novel, Rapeseed, is now available as an ebook on Kindle:

Tuesday 11th June 2019
Society of Authors, Three Counties, lunch at The Seahorse, Guildford. “Women who loved”
I was speaking about and reading from my poetry collection In the Image: Portraits of Mediaeval Women.

Saturday 8th June 2019
I read with other poets at the Hellens Garden Festival, Ledbury.

Saturday 22nd December 2018
I read a couple of poems at a concert of Christmas music in Guildford, with the Occam Singers.

A reading by five poets in support of the Corrymeela Community,
Northern Ireland’s oldest Peace and Reconciliation organisation

31st May 2018
Possibly a pomegranate
This recent poem has just been published in Acumen. The Editor asked for a video of it to put on their website, so if you’d like to see it, you can find it here.
Many people don’t realise that there is no mention of an apple in the Genesis story of Adam and Eve!

19th May 2018
Super reading at The Crypt, Islington With two new books, 2017 was a busy year of readings.Thank you to all who invited me or come along and been appreciative. Here are a few of the most recent ones:

June: Launch of ‘In the Image: portraits of mediaeval women’, Bergen, Norway

October: ‘In the Image’ at Poetry on the Lake, Orta, Italy

A talk to the Modern History Group at the Guildford Institute, entitled ‘A Poet’s perspective on mediaeval women’

Taking part in a tribute reading for IDP on Dartmoor

and a morning at Kingsbridge Library. When I was invited by Maggie Butt to read as part of a Poem-a-thon to raise funds to re-settle a Syrian refugee family, we were aiming to raise £4,500. As the project went into top gear, we sailed past that target and wondered if we could raise £9,000 to re-settle two families. Yes, we could, we realised, as we passed that figure comfortably.

The event took place on 1st October at the Dugdale Centre in Enfield, with a star-studded cast, including John Hegley, Mario Petrucci, George Szirtes and many others. There was a book stall, a cake stall, bric-a-brac and tombola, and the room where we were performing was packed throughout the day.

The money is still pouring in, and we have now raised £14,500, so will be able to re-settle at least three families. Many thanks to all the poets, to everyone who sponsored us, to those who bought books, cakes, etc, and most of all to Maggie for her vision, enthusiasm and sheer hard work. What a fantastic project! The next excitement is the final conference of the Leverhulme project, Women’s Literary Culture and the Medieval Canon, which is being held in Bergen this next week. Seventy or so scholars from universities all over the world are converging on Bergen University, to present and listen to a series of fascinating presentations. I’m delighted that they have given me the opportunity to do a reading and book launch of ‘In the image: Portraits of Mediaeval Women’, which should fit in really well with the theme of the conference. I hope to write a blog about my time in Norway, both before and during the conference, so do have a peep at my blogs in a couple of weeks’ time. Following publication of my novel, ‘Rapeseed’, in March, a new collection of my poetry was published by Indigo Dreams Pamphlets in April. It’s called ‘In the Image: Portraits of Mediaeval Women’, and will be officially launched at the international conference on ‘Women’s Literary Culture and the Medieval Canon’ in Bergen in June. It is a series of poems about various mediaeval women, followed by notes about the women and the poems. The book is available direct from me, or from Indigo Dreams, and costs £6. My first novel was published in March 2017. It’s the story of a young academic researching the children of rape victims; but the story also covers themes of work/life balance, different sorts of love, obsession, the main character’s search for her father and issues of commitment in a relationship.

The novel was launched during the International Women’s Festival in York. There will also be events at which I’ll be introducing it in the next few months at a Society of Authors lunch, the University of Surrey bookshop, the St Ives Literary Festival and at Ways with Words in Dartington.

The book is published by Stairwell and costs £10.

Abegail Morely posts poems for Christmas on her Poetry Shed website each year, and on December 23rd 2016 she shared my poem ‘Sensing the Stable’, which is the poem I wrote for this year’s Christmas card. I have written a Christmas poem each year for many years, and sometimes they appear on-line. The last one was when Helen Ivory used one of mine on the Ink Sweat & Tears website last year.

The prize-giving for the South Bank Poetry Competition in London was very enjoyable. Mimi Khalvati was the judge, and the launch event of the anthology was organised by Katherine Lockton at City Lit. The standard of the winning poems was high, and I was very happy to be commended for my poem, ‘On landing G3’.

A rather unusual honour was to receive this trophy, the Musikkorps der Stadt Hess Oldendorf cup, at the Silver Band I joined last year. It’s awarded to the player who has made the most progress in the past year – and as I started at such a low level (ie pretty well unable to play a note), my progress has been fairly noticeable. I’m still very much an amateur, but am now even further inspired to practise hard and improve. It was amusing to receive a prize which didn’t involve any writing at all!

I’ve got a number of readings coming up in October: Poetry on the Lake in Orta, Italy; Guildford Book Festival; and two readings for the anthology Poems for Jeremy Corbyn – one in London and one in Oxford. Unfortunately I’ll miss the Broadsheet one in Exeter, and probably the ‘Seven Ages of Woman’ one. It’s all go in Poetryland these days!

I was pleased to be shortlisted in the Paragram Poetry Prize competition.

A poem of mine was one of five commended in the South Bank Poetry competition. Prize-giving in October. 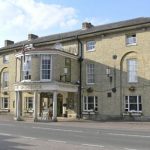 I enjoyed being the guest poet at Open Word on Sunday 28th August at The Grosvenor, High Street, Stockbridge in Hampshire.

I was thrilled to win first prize in this year’s Jack Clemo international poetry competition, with my poem ‘Transition’. 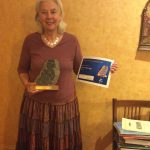 Here’s a picture of me with my prize and trophy.

This spring I was privileged to be part of a delegation of six British Poets to Romania. The other poets were Jeremy Page, Anne Stewart, Maggie Butt, Katherine Gal 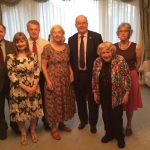 lagher and Peter Philips. We worked with the Masters students at the University of Bucharest each morning, then explored and socialised in the afternoons and evenings. We were treated royally throughout and thoroughly enjoyed ourselves.
If you’d like to read more about the visit and see some pictures, please visit my blog and scroll down as necessary.